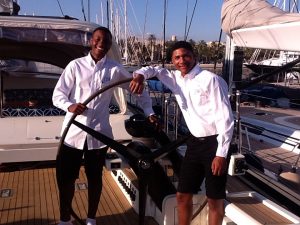 Although the sailing day started well, it ended in disaster for “P2”, when there was a miscommunication between the foredeck and the after-guard, resulting in a fouled spinnaker take-down. The sail fell and was dragged into the water and wrapped itself around the keel despite huge efforts by all onboard to drag it clear of the water. Eventually one of the crew had to dive in with SCUBA gear to cut it free, but by then “P2” were out of the race, and so came in last on this final day, destroying any chance of a podium-finish for “P2” in the regatta over-all. Though there was an air of disappointment onboard, both Thami and Archie were exposed to a valuable lesson – in yacht racing and sailing in general, a good day can become a bad day in very short order, even with attentive preparation and practice.

The ‘Superyacht Cup 2015 Prize-Giving’ took place in the events-tent at the Regatta Village and the yacht “Marie” took the coveted first place. See the regatta website for full details of all the prize-winners. 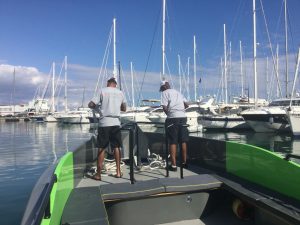 After this we jumped into the 12 meter ‘Rafnar Fast Open Boat’ for a short demonstration of its high-speed capabilities and sea handling – which was very impressive. We then all adjourned to the ‘Boat House’ restaurant for a burger and fries.