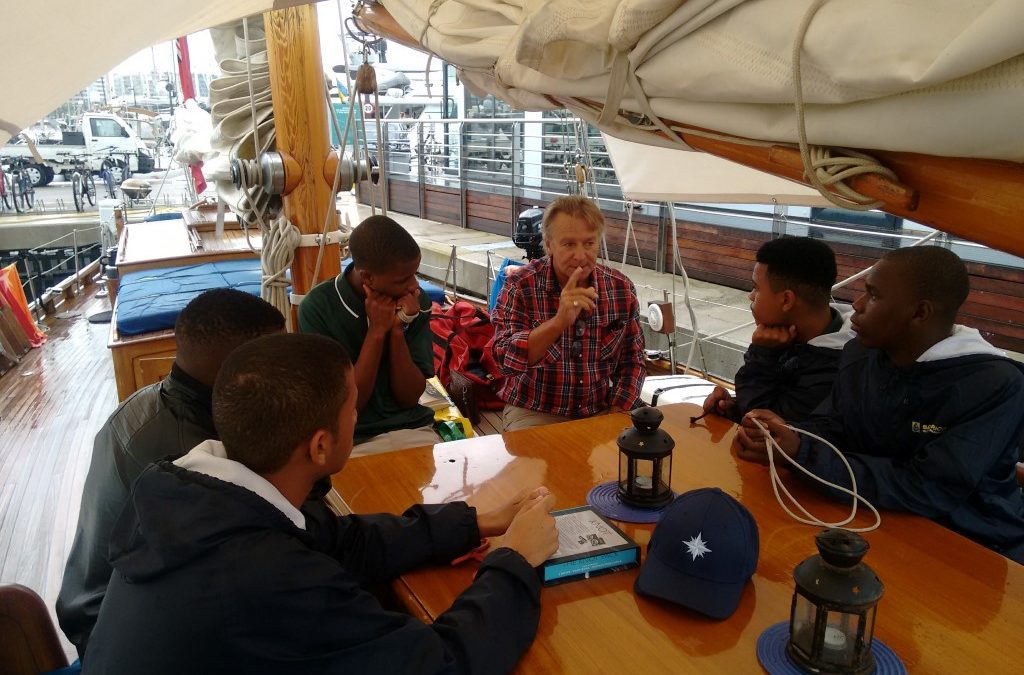 DAY 1
At midday on Sunday we met all five of the boys on schedule at Palma Airport, piled into two cars and drove to the Aloha J of Cariba. After they had settled into their new digs and had a shower we took them off to the WOK restaurant for a late lunch. This is a fantastic, “all you can eat” Chinese run establishment with great food buffet style, so the lads had a feast and were smiling from ear to ear. We dropped them off in the old town under the guidance of Terry and Tamzin who used to work with Sail Africa in Durban. She now works as deckhand on a super yacht currently in Palma and she wanted to meet the boys. They explored the historical old town, stopped by our house and then headed back on board for a good night’s sleep.

DAY 2
Another sunny and warm day here in Palma. We took the group to see the 43 meter sailing boat ‘Clan V111″ (http://www.charterworld.com/index.html?sub=yacht-charter&charter=sailing-yacht-clan-viii-7198) which is berthed quite close to Aloha J. James, the captain, is also a South African and he gave the lads a good long tour of the boat. Clan is a heavy displacement yacht which is a full on motor sailor. Next we went to motor yacht “Mary A” also with a South African captain called Barry Jones. Mary A is a 46 meter luxury superyacht(See https://yachtharbour.com/yacht/mary-a-840) with 10 crew and a busy schedule, they spend the northern summer in the Med and the winter in the Caribbean so cover a lot of miles each year. Although the boat is 15 years old it is in immaculate condition.

After a brief lunch of sandwich at the Wade house we took them down to see the other end of the spectrum – Highland Fling. see – https://www.yachtcharterfleet.com/luxury-charter-yacht-48137/highland-fling.htm. HF is a brand new very high tech race boat built in Finland and launched in May this year. Captain Xavier gave them a detailed description of the construction and his wife Sara, who is a rigger told them all about the amazing lines that they use. The lads had many interesting questions.

A great dinner cooked by Anne and Law at our house was shared with Anna Wardley who also did a detailed interview with each of the lads.

Also see our Face Book page which is updated daily.

DAY 4
The weather continues to be kind to us, not too hot but lots of sunshine. The morning was spent on board doing chores and learning rope work. In the afternoon they had a couple of hours at MSOS with “Medical Nick” who told them all about his business. Medical Support Offshore (MSOS) provides comprehensive support for clients across all the world’s oceans. MSOS delivers this service to a wide range of clients, from super yachts to families cruising around the world and over the past thirty years, has supported iconic yacht races such as the Whitbread, the Volvo Ocean Race, the Global Challenge and more. An interesting and inspiring visit.
From there they went to Master Yachts and were shown all the ins and outs of yacht management. In the evening Terry who runs the MI website hosted a 2 hour class of Self Defence, Terry is a marshal arts instructor in his spare time back in London and is very experienced. The idea was to raise some funds for MI but in the end very few people turned up so it was mainly us and the boys, however the lads enjoyed it immensely and I am sure it will be something well remembered. Law, my niece is also down here helping Anne with the catering and it has become her “thing” to take the lads out for a Pizza Evening which went down very well as usual

DAY 5.
Boat visits in the morning being shown around on board Visione and Mia Cara. Visione is a 45 meter high tech race boat skippered by South African Garth Brewer. As a result most of his crew are from SA and they are great supporters of Marine Inspirations. Steve Ray is captain of the 39 meter Kiwi built Mia Cara and also a great supporter. Mia Cara used to be called Ganesha until the present owner renamed her and Steve took over.
The boys came back to the Wade house for “do it yourself” lunch sandwiches and then out sailing on Aloha J in the afternoon, returning to the dock at 1800hrs for a dock BBQ and a quiet night on board.

A full day on the water today but unfortunately not a lot of wind until a mild sea breeze kicked in in the afternoon. They practiced man over board for an hour or more in the bay in front of the Cathedral, each taking it in turn for different positions and responsibilities. Sailing across to Palma Nova where they did some anchoring and then across to Isletas Bay where they did some more anchor drills. Sandwiches for lunch and a swim to shore to experience wearing life jackets. Terry gave Smanga swimming lessons and got him to actually swim and he was very very happy!
Anne fed them large portions of chilli con carne at our house later that evening. On their way back to the boat ( about 15 minutes walk from our house) they were stopped in the street by a young lady who said “Are you the guys from South Africa”? It turns out she is also from Durban and recognised them from the newspaper article so now the boys are famous!! The girl works on a super yacht and was very impressed and now wants to help out with Marine Inspirations.

DAY 8
And one week since the boys arrived. We took two cars up to Alaro to visit our weekend retreat up in the mountains which we fondly call the “Goat House” although we do not like the goats which break down fences and destroy everything! The lads said this was one of their favourite visits.
We drove a short distance to Richard Masters house where he put on a BBQ for us all plus a few other supporters. Richard has a beautiful house in the country and his wife and kids are very much into horses – see the attached photos! We had a really relaxed afternoon and Anthony played the guitar and sang some songs with the boys getting involved at times. We loaded up the three cars (12 of us) and headed back into Palma just before the sun set. A really nice day.

DAY 9
Terry took the lads into town as they were super keen to do some shopping for gifts and mementos. From there they went to Echo Marine who make and service H.E.M. reverse osmosis water makers for yachts. They were given a comprehensive tour and we were told that they asked a lot of intelligent questions and very interested. After a lunch in the fishing port they went out sailing again on Aloha J, back in port at 19.00 hrs and then to the Wade house for a lovely casserole made by Anne and Law

DAY 10. – Their last day – :'(
Off in the morning to visit Omni Access which is a company supplying satellite communications to yachts and ships. OA is situated about half and hours drive out of town so they only got back just before lunch and then went on to visit “Win Win” a flat out racing yacht which won the Super Yacht Regatta in June when they had one of our Lawhill boys on board. Back to Aloha J where they loaded their bags into our cars and we headed off for a Paella at SA Cranca restaurant. We then took two cars to the airport and checked the guys into their flights not without a few minor problems which were eventually overcome. They flew back from Palma to Frankfurt then to JHB and finally either Cape Town or Durban as appropriate. They were all sad to leave but a good experience for all.